How to easily crop pictures in PowerPoint

PowerPoint has fairly advanced features for editing pictures (as compared to other presentation softwares). However, most presenters are not aware of these features.
They end up spending a lot of time and effort editing pictures in photo editing software.

In this post, I’ll share 3 Advanced PowerPoint Picture Crop tips to get more out of your photos in PowerPoint.

This includes how to Crop the picture to any shape, adjust focus to the middle of picture or any part of the picture, compress picture after cropping to reduce file size.

In addition to this, you’ll find a creative way to use the picture crop option (to solve a very common problem in PowerPoint).

After going through this tutorial you will be able to :

Hope you found the crop tricks in the video useful!

Now that you know how to use the crop tools like a pro, lets get to solving a common issue presenters face with using pictures on their slides.
Especially when they want to fill their slide with the picture, and the picture is the wrong size!

Trick to Extend Pictures That Don’t Fill Your Slide

Learn how to quickly and easily adjust pictures in odd sizes to your widescreen PowerPoint slide – right in PowerPoint.

Pictures that cover the whole slide look clean and beautiful. They come in quite handy when you want to evoke emotions in your audience.

However, most photos come at odd sizes that don’t fit the default slide dimensions (especially, when you want to use the 16:9 format in PowerPoint 2013 version).

When you stick such odd sized pictures on your slides, the empty spaces on the sides look ugly and unprofessional like this:

Sometimes, you can’t crop the photos to fit the 16:9 dimension, because you may lose a few key details from the picture.
Here are a couple of examples where this would happen:

Some presenters use the trick of extending the photos. This makes the slides look very unprofessional.

How do you overcome the issue?

How do you use such photos without leaving those uncomfortable empty spaces on the side? How do you ensure the result looks professional?

Make copies of the photo. Use the crop tool in the ‘Format’ tab of PowerPoint ribbon to retain just a thin strip from the sides of the photo as shown below:

Select each of the thin strips. Go to the ‘Arrange’ tool in the Home tab of PowerPoint ribbon. Click on the small arrow to open the drop down menu. In that select Rotate → Flip Horizontal.

Now, place those flipped strips at either sides of your original photo to fill the empty space as shown below:

The end result would look as clean as this:

Here is the before and after slides –

Your audience would never be able to guess that you did any sort of manipulation to the original picture.

They’ll just keep wondering about how you manage to get such beautiful pictures in the exact slide dimension each time.

Hope you found the additional tip on how to creatively use Picture Crop tool in PowerPoint useful.

Learn how to create an interesting spinning SmartArt Gear animation[...]

Learn to create this versatile and easy PowerPoint Circular Flow[...] 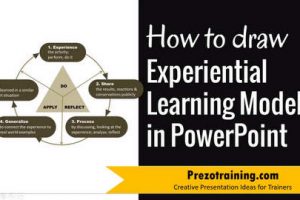 How to Create an Experiential Learning Cycle in PowerPoint

© 2020 — PrezoTraining.com. Fully owned and operated by Bizprez Training LLP. All rights reserved. PowerPoint is a registered trademark of Microsoft and Microsoft does not endorse this site or products in any way.